Paul George and Kawhi Leonard were ‘destined’ to play together

A CROWD FORMS on the shores of Waikiki Beach, gawking at a procession of extremely tall passengers preparing to board the bright yellow and blue “Manu Kai” catamaran.

At the front of the line, Paul George anticipates the waves and darts up the staircase, hopping aboard the boat just as the water recedes to avoid getting his white Air Force Ones wet.

Not far behind, Kawhi Leonard, Patrick Beverley, Landry Shamet, Ivica Zubac and a few other teammates board for a sunset boat ride. There are some ominous clouds on the horizon and the waves are extremely choppy. Even though the Hawaiian sun shines brightly, rain drizzles as the “Manu Kai” takes off for its one-hour journey signaled by the sound of a booming horn from a crew member’s conch shell.

The rain dissipates after a couple of minutes and a rainbow beams brightly from the middle of Honolulu’s downtown skyline to the base of nearby Diamond Head crater. And as the LA Clippers take in the moment — with rookie Mfiondu Kabengele blaring “Pink Toes” on his iPhone — George and Leonard are seated next to each other, chatting, laughing, getting to know each other.

George didn’t make his Clippers debut until Nov. 14, but spent ample time with Leonard in the weeks and months prior. They attended a Hollywood dinner party. They sat next to each other at the first training camp team dinner. They attended Lou Williams’ Halloween birthday party; George appeared as the Night King and Zubac as Jon Snow from “Game of Thrones,” Montrezl Harrell was the Wolfman, Patrick Patterson was King Tut and Williams was Michael Jackson from “Thriller”. Leonard arrived as himself; the board man did not dress up.

Monday through Friday, host Mina Kimes brings you an inside look at the most interesting stories at ESPN, as told by the top reporters and insiders on the planet. Listen

They’ve shared inside jokes on the players’ group text chain. And the two have stayed at the practice facility talking basketball in the locker room after the others were gone.

Hawaii already counts as their second boat trip together — the Clippers had a deep-sea fishing expedition earlier in the offseason.

“This is what these opportunities and these moments right here are for: just getting out, being around each other,” George says. “Just hanging. It’s going to happen again. Nothing’s rushed. That’s the beautiful part about it… It’s just great when we get in the gym together, we bounce, we feed off one another. We listen to each other’s mind, we speak about basketball.”

Neither Leonard nor George were five-star prep recruits. Neither has the blue-blood university pedigree — George went to Fresno State and Leonard attended San Diego State. Though the two Southern California natives are only now getting comfortable with each other off the court, their paths have crossed since high school in ways that have left the two All-Stars believing they were destined to play together. And they understand that their developing chemistry will be vital in contending for a championship.

AS THE CATAMARAN navigates through rough waters, George leans on the railing and admires the picturesque view of a rainbow-splashed downtown Honolulu.

In June 2017, George was dreaming of different scenery. When the All-Star forward informed the Indiana Pacers that he wanted to be traded, reports came out that he wanted to return home and be moved to the Los Angeles Lakers. But George had another team on top of his wish list. 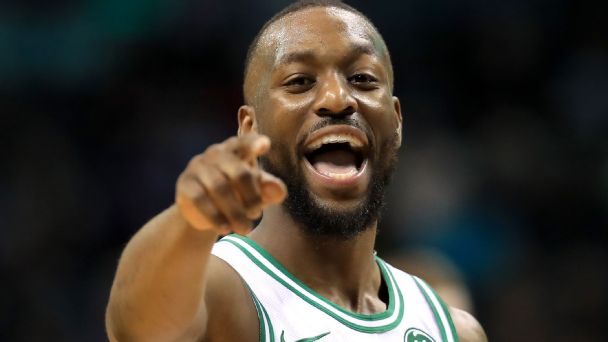 A league source confirmed that the Pacers and Spurs talked, but San Antonio lacked the assets to pair George with Leonard. The Lakers also wanted George, but then team-president Magic Johnson would not trade the 2017 second overall pick (which would become Lonzo Ball) and Brandon Ingram, believing they could eventually sign George as a free agent.

Sam Presti of the Oklahoma City Thunder would eventually swoop in and acquire the Pacers star, but the idea of teaming up with Leonard lingered.

GEORGE AND LEONARD coincidentally were both drafted by the Pacers, George selected 10th in 2010 and Leonard going 15th in 2011 before being dealt to the Spurs.

George recalled watching that 2011 draft and being confused by the Pacers’ pick. Before learning of the trade, he wondered why the Pacers would pick a player who played the same position and displayed similar strengths. George was entering his second season with the Pacers and was feeling unsettled and nervous that Leonard could take his job.

Leonard was wondering the same thing.

“I’m like, ‘They already got a two-way player,’ ” Leonard said in July at their introductory press conference. “But as our careers moved forward, I see how he developed — how I developed — and I wonder [what] if we would have stayed in Indiana.”

It was only two summers earlier that George first remembered hearing of Leonard. George had just finished his freshman season and, while attending the LeBron James Skills Academy in the summer of 2009, heard a buzz about a young player with gigantic hands heading to San Diego State.

“I heard he was good,” George says. “They were talking about his size because he was younger than everybody. All of us were going into sophomore, junior, senior years. He was the freshman, the young guy there. Everybody was kind of wanting to feel him out.”

But an injury prevented George from meeting and playing against Leonard at the camp.

“I didn’t get to see him and [thought] that was the end of that story,” George recalls.

Four months later, Fresno State was preparing to play San Diego State in the fourth game of the season. One name immediately stood out to George on the Aztecs’ scouting report: Kawhi Leonard. And once they matched up on the floor, George felt like he was staring at a clone.

“I took a personal matchup to him, a personal vendetta that I wanted to be the best player on that floor. And I got that same feeling from him and I knew right away how special he was going to be.”

Leonard, too, was using this matchup as a measuring stick.

He remembered George as a senior at Knight High School when Leonard was a junior at Martin Luther King High in 2008, and George’s name circulated through Southern California basketball circles. The two even played at the Honda Center on the same day during the 2008 high school division championships in Anaheim, though Leonard didn’t get to see George play because of game scheduling.

“You know, AAU circuit. People talk. Kids talk to each other, say who they seen in certain games or had the college camps,” Leonard said after the Clippers’ Nov. 13 loss at Houston. “Yeah, I know a lot about him.”

“His sophomore year, he was a top-10 pick or supposed to be top 10,” Leonard added. “So I just knew he worked his way up. When we played, I just wanted to match up so scouts could see me.”

WHILE SITTING OPPOSITE George on the other side of the “Manu Kai,” Leonard’s curiosity gets the better of him. The reigning Finals MVP asks to watch his new teammate being interviewed on a high-tech wireless monitor. Holding the monitor with both hands, Leonard spends a few minutes interested in not only the device but seeing everything from the perspective of the Red cameras.

Later, as the sun sets off the coast of Oahu, Leonard and George move to the front of the boat. George, wearing a green Hawaiian lei around his neck, sits with his teammates facing the shores before moving toward Leonard, who is standing against a railing talking to other Clippers.

Just three months before, they were meeting at an undisclosed location to hatch a plan. Leonard reached out to George “a good four or five days” before the July 5 trade, recruiting him to do what they couldn’t back in 2017 — join forces.

“We met up and we talked,” George said recently. “Before the trade, [even] before everything was in talks.”

Together, they have a chance to do something never done with the Clippers.

“Paul has always been a player that I wanted to play with,” Leonard said while sitting next to George and Clippers owner Steve Ballmer back in July. “… And I think we got something special. We can make history here.”

Shortly after the “Manu Kai” returns to shore, George walks through a crowd of tourists back to the team hotel. Leonard isn’t far behind, their paths that intersected previously are now the same.

“Just seems like it was destined,” George said when officially introduced to L.A. “We were supposed to play together.”