More US sports events postponed in protest at Jacob Blake... 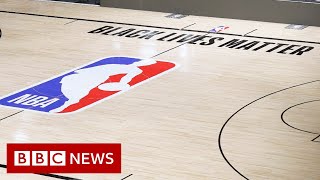 A host of US sports games were postponed for a second straight day in protest at the shooting of Jacob Blake.

Blake, a black man, was shot seven times in the back by police on Sunday in Kenosha, Wisconsin near Milwaukee.

The NBA has postponed Thursday’s play-off games after Wednesday’s fixtures were called off following a player walkout.

The NHL announced that four games scheduled for Thursday and Friday had been called off as well.

The WNBA postponed Thursday’s games having done the same a day earlier.

NBA held meetings on Wednesday and Thursday in their bubble in Florida.

Bass said a video conference call would take place later on Thursday which will include players, team governors and representatives from the league office “to discuss next steps”.

US President Donald Trump said on Thursday that the NBA has become “like a political organisation” while senior adviser Jared Kushner, Trump’s son-in-law, added that he intends to invite the Los Angeles Lakers star LeBron James to the White House to discuss solutions to racial injustice.