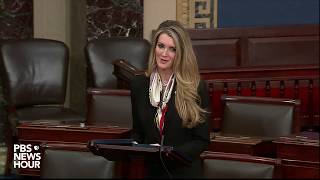 Sen. Kelly Loeffler, R-Ga., said there was “much to regret,” about the impeachment trial, criticizing the House of Representatives’ “false urgency” and calling them “more focused on political power than pursuing the facts.” “For the last two weeks, we’ve been stuck in the Senate chamber working on something many Americans have little interest in,” said Loeffler. “It’s very clear this is not something the people at home care about.”

House managers and the president’s legal team each delivered their closing arguments in the impeachment trial on Feb. 3 before senators began to weigh in with debate on whether to remove Trump from office. In December, the House of Representatives charged him with two articles of impeachment — abuse of power and obstruction of Congress. After the Senate on Friday voted to bar new witness testimony and subpoenas for documents, Trump’s acquittal has seemed all but assured.

Advertisements
How To Watch Latest Movies and TV Series Online